Though of a reasonable, easy-going disposition, I do, like most, have my bugbears. Chief among which is people who lie for a living. Chief among whom are quacks. And those in public positions of influence who promote them and their snake-oil wares.

Re-enter David Tredinnick, Conservative MP for Bosworth in Leicestershire, whose continued dim-witted advocation of the expending of public money on disproven and unproven treatments has led me to label him the ‘Minister for Quackery’. (It is, I think, the nearest he will ever get to being an actual Minister for anything.)

Being reasonable, I was pleased to note that Tredinnick campaigned to Remain in the European Union. But my slack was re-tied when he (like 292 others MPs, including my own) later contradicted his stance by voting to not endorse retention of the rights of EU nationals to live and work in the UK, if/when the UK exits the EU.

Obeying the whip for the sake of Tory unity? Perhaps. His voting record, which includes sympathy for rich bankers and mansion owners, but suggests antipathy to the rights of gay people, foxes and… humans, is hardly surprising. He represents a largely well-heeled seat in a fox-hunting county. I imagine the majority of his constituents are either ignorant of, or ambivalent/indifferent to his quackery-promoting tendencies, being prepared to overlook their representative’s eccentricities, providing he sports a blue rosette.

Even though Tredinnick has a record of misleading The House of Commons and its Select Committees on health matters.

I’ve commented previously on how parliamentary privilege permits MPs to say whatever they like in The House, providing they do not knowingly lie. Thus, whenever Tredinnick stands to promote homeopathy and other quackery, we must assume that he believes what he says. Which means what?

Early last year, Tredinnick embarrassed himself when he mouthed off about ‘clear evidence that homeopathy is effective in treating autism‘. A Freedom of Information request by Alan Henness turned up this ‘evidence’, revealing that Tredinnick has no clue what the word ‘evidence’ means. This from a member who previously sat on the Select Committees for Health and for Science and Technology.

Never mind his deluded pretensions to being the funding salvation of the NHS. This wasting of his fellow parliamentarians’ time is not only gross ignorance; it is, in its suggestion of an illness requiring of treatment, utterly disrespectful to autistics and their families. But so fervent is he, rejection and correction do not register on his dicky radar. I have been told that many MPs groan and roll their eyes when he goes off on these tangents; but who confronts him on them?

It seems too few. So, like the fool with no friends, he continues unabated. In September he was at it again, recycling the recycled nonsense about the Swiss government supposedly endorsing homeopathy. This ‘misunderstanding’ is a favourite resort of the propagandists who alight on comment threads below media articles on homeopathy. Never mind that they’ve been corrected on this: they just ignore, and repeat the misinformation. Either Tredinnick is completely ignorant of the facts here, or he fails to acknowledge them. If the latter, he is no less irresponsible than such liars. (Or perhaps he’s just confused. He also said, ‘The template for moving ahead should be the campaign of more than 100 years to stop people smoking and stop cigarettes dominating our lives.’ This from one who has generally voted against smoking bans.)

And only last week he whined about the ‘attacks’ on ‘honourable… medicine’ homeopathy, taking a swipe at The Good Thinking Society, which, he disparages, ‘really consists of one man and a dog’. The previous week he misinformed The House and The Secretary of State for Health that homeopathy can substitute for prescribed antibiotics because:

The Health Secretary’s response was lame, commending Tredinnick for ‘his great persistence in flying the flag for homeopathic medicine’, before adding, “… we must always follow the science in the way we spend our money on medicines, as I know he agrees… “.

If Jeremy Hunt is so convinced of Tredinnick’s commitment to science-based medicine (which is not how Tredinnick positions himself), why didn’t he ask the clot for the evidence of these ‘very good scientific trials’? Or is Hunt here, as I hope, blithely dismissing Tredinnick’s contribution?

Fortunately, enough of Tredinnick’s fellow MPs have caught on to his regressive posturing: he was not voted back on to the Select Committees for Health and for Science and Technology. But he still has his allies. Why does James Duddridge consider it worthwhile ‘To ask the Secretary of State for Environment, Food and Rural Affairs, what plans the Government has to relax laws and restrictions imposed by the EU on homeopathic medicines, herbs, vitamins and mineral supplements after the UK exits the EU.’?

Ignorance is forgivable. We’re all ignorant on most things. But wilful ignorance on the part of our elected representatives is not. Making statements on important health matters, whilst failing to verify – or overlooking the lack of – any evidential basis, is lazy, neglectful and irresponsible. And to do so repeatedly is deluded, or just plain stupid.

I give you The ‘Right Honourable’ David Tredinnick MP, ‘Minister for Quackery’. 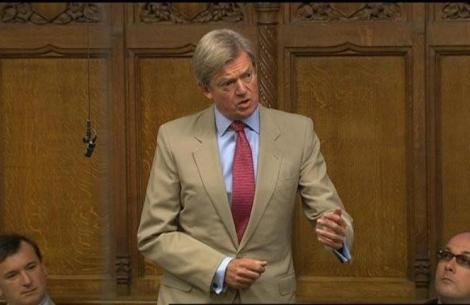