At the tail end of this last World Homeopathy Awareness Week, during which I at last got myself onto Twitter, and been having my fish-‘n’-chips’-wrapping-paper’s worth of input here and there (and, I must admit, finding it quite addictive), I’ve re-encountered that common reaction of those who don’t like it when you challenge the questionable/dubious public claims they make or endorse – the blocking censorship of deemed (potentially business-affecting) negativity.

Batty enough as homeopathy is, one might, if feeling in particularly fair mood, grant that some are on the more ‘sensible’ end of the battiness spectrum, restraining their discussion of what they claim homeopathy can effectively treat, and (occasionally) condemning those who claim it’s efficacious application to serious, life-threatening disease. That’s not to give any credence to any claims made by the homeopath who quacks less noisily – this may merely be part of a ruse aimed at acquiring some kind of regulatory ‘respectability.’ (And if you tolerantly indulge even that without query and challenge and ridicule, you should consider your own complicity in the perpetuation of the cult.) But things veer from the laughable to the downright disturbing when one happens to land on one or other of the copious websites promoting the often outlandish claims made by homeopaths in (for example) India.

At many such sites (though I have no idea how many there are), you can find claims for effective homeopathic treatments and cures for pretty much any (serious) malady you can think of. Moreover, you’ll also likely find (often indirectly, via their occasional appearance among the comment threads at homeopathy-criticising blogs and news articles; or their partaking in tetchy tweeting arguments) that their authors/owners/colleagues/supporters unashamedly subscribe to some of the wackiest pseudoscience you’re ever likely to come across. I perhaps ought here to give links to examples – but they’re so easy to find (knock yourself out and try many a link proffered as ‘evidence’ by the homeopathy propagandists who defensively descended on Edzard Ernst’s recent Guardian piece ). The individual whose statements I’m about to criticise provides some for the sake of argument.

Clicking on the provided URL (because that is what it is there for) led me to a short news article (an apparent press release) in ‘India’s most comprehensive pharma portal’. Admittedly, the statement in the above tweet is somewhat more measured than the article’s title: ‘Homoeopathic treatment can cure subclinical hypothyroidism in children’. Cure, eh? A claim made following a study of homeopathic treatment, conducted by homeopaths, at a homeopathic hospital/centre for homeopathic research, facilitated by a homeopathy research council, and published in the journal Homeopathy. (And no, I am not going to access the full published article – the poster of the above tweet was apparently satisfied with the summarising news piece, so let’s stick to that.)

This tautologous press release describes a trial. (Which throws me… because I’m never quite sure about homeopaths’ position on the randomised clinical trial: we get them bleating on that, as homeopathy considers the individual, the RCT grouping of patients cannot apply, and so any RCT reports which find no effect are invalid; but then we get them citing supposedly positive reports of the outcomes of… RCTs?! You cannot have it both ways: are they valid, or aren’t they?) Well, hang on there, it describes a ‘single blind trial’ (of 162 patients who completed the study, rendering it confusing and unnecessary to mention the ‘study was carried out on 5059’ – because it wasn’t), from which, I take it, the homeopaths who ‘randomly allocated one or other of the different treatments’ were aware which they were administering. Which, as far as I’m concerned, means any findings and conclusions are pretty worthless (hence, I have no interest in the full published article).

Irritated by the promoting of such material by:

I fired off the following:

Which I later discovered had resulted in:

Charming! I can speculate on why, rather than exercise the simple option to just ignore me, I am no longer allowed to see anything she tweets. But this sort of ostrich evasive activity I always find infuriating, and so consequently:

And the next day:

Now, you might (not unreasonably) be wondering at my petty whingeing about this. Maybe this is how it is on Twitter, and I’ll gradually calm down about such censorship. After all, she has, on a public interactive social platform, every right to block whomever she wishes from her own account, right? So what’s the point here of going after it? Well, I wonder what else there is she’d rather I didn’t see. So I sauntered on over to her website, and, as I wanted to comment, searched out her publicly-available Facebook page.

Predictably but nevertheless alarmingly, there’s all manner of egregious posting of links to claims that homeopathy can treat this, that and the other – including (in addition to the above thyroid ‘trial’ that brought her to my attention): AIDS (India), ADHD (India), chronic sinusitis (India); and also the reaching resorts to pseudoscience (‘Nanoparticles in Homeopathic Medicines’, India) and appeal to celebrity (QE II, Daily Mail). Moreover, there’s suggestions of anti-vaccination sympathy.

But it was another post that diverted my attention – the flagging of a 2012 article by homeopathy propheteer, Dana Ullman, excitedly and prematurely crowing about a report many homeopath propagandists have – and continue to – cite as evidence that it all works just great! And, in emphasis, this is coupled with the appeal to authority that the report in question must be bona fide because it was sanctioned by the Swiss government. Only it doesn’t; and it wasn’t.

As the homeopath is unlikely to be receptive to correction of their perception of the report’s validity (as ‘evidence’ for the efficacy of homeopathy) – and equally unlikely to tolerate suggestion that one of their cult’s chief prophets is talking biased bollocks – I figured it worth pointing out the incorrectness of the statement attributing it to the Swiss government: 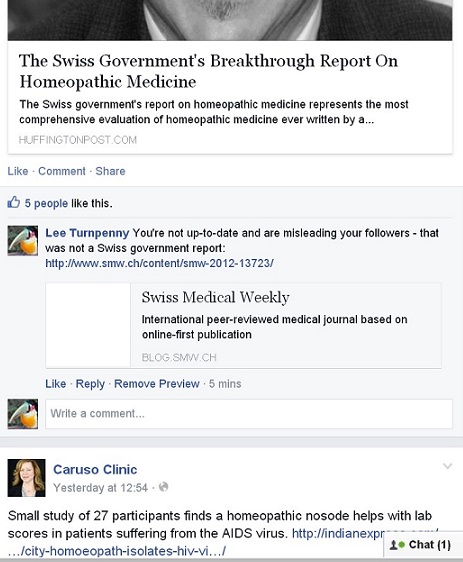 Lo and behold, this actually got a response – incorrectly rejecting the reference I’d supplied. So I provided another: 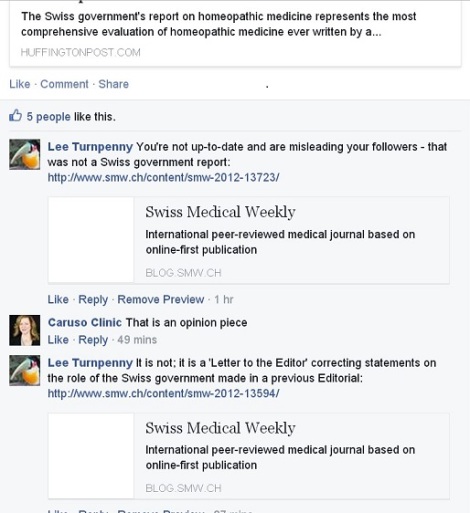 This was left hanging for a short while… before the post and accompanying comments were summarily deleted. So I was unable to next point out that she had apparently failed to read the Statement of correction Ullman had himself appended (belatedly, by over a year) to his article, conceding that it was not a Swiss government report. (Which does beg the question why the article’s title/by-line still suggests such?) Unsurprisingly, however, Ullman fails to concede that his article remains a misleading representation, as the second provided reference and information elsewhere explicate in detail.

This (wilful?) ignorance – the homeopath tendency to continue with the preferred interpretation; or to fail to get facts right – is not uncommon. This week, the US Food and Drug Administration held a two-day ‘Hearing on Regulation of Homeopathic Medicine’. I tuned in for some of it online, shaking my head at much of the nonsense that was apparently being taking seriously by those in attendance. Of the many pro-homeopathy speakers, Bruce Shelton and Michelle Dossett both reiterated this crap about the ‘Swiss Government Report’ – have these people not been made aware? Also there, basking in the acquired ‘celebrity’ the Queen’s homeopath enjoys in such circles, was Peter (“The shaking is important… If you just gently stir it, it doesn’t work”) Fisher, who only last year erroneously cited the same report in evidence presented to the House of Commons Select Committee for Science and Technology – thus presenting a ripe cherry for eager picking by one David Tredinnick, MP. Yes, he who considers critics of homeopathy ‘ignorant bullies’ who’ve ‘never studied the subject.’ But it seems to me that, to its coterie of propagandists who hover the internet and descend to re-deposit their copy-pasted quack guano all over Twitter and comment threads, quality and verification is simply not an issue. Incapable of assimilating correction, anything goes. Rather than flagging up any ropey old study as ‘evidence’ for marketing and perpetuation of the faith, homeopathy could do with a few more critics within its ranks, to recognise, to call out and to reject the specious and the unethical claims made under its banner. Though quite how much that would leave…