Quackery abounds. And quacks abide. And their devotees stick their deluded noggins in the oblivious sand.

A few days ago I came across a retained news clipping among my disorganised paperwork, one which, as I eventually recalled, had irked me into firing off a response on the comment facility beneath the online version. Well, somebody has to challenge/counter highly contentious public pontifications, particularly when aggressively made by someone posturing as a ‘food coach’, thereby claiming authoritative licence to condescendingly tell you what you should and shouldn’t ingest.

After re-reading, I decided to look-up this character’s blog, ‘it shouldn’t happen to a vegan‘, at the provided address (because that presumably is what it is there for and why it was supplied). Let me first draw your attention to the footer of its pages and the (inevitable) ‘LEGAL STUFF’ disclaimer, which states:

‘No medical claims of any kind, related to any of the information on this website or in any of the services offered, or products offered in or through it, are made or implied.’

Keep that in mind.

I started my tour with a read of a recent blog post, entitled ‘Pharmaceuticals vs. the natural way to beat cancer: a media circus‘, wherein is discussed a controversy involving the Hippocrates Health Institute, Florida, an organisation to which the author makes frequent referral … because, as we’re copiously informed, she spent some time there: a nine-week stay culminating in certification as a ‘Hippocrates Health Educator’. Accompanied by declaration that this is ‘One of my proudest achievements. Ever.’, the certificate is displayed among other HHI tokenisms on a ‘My Credentials‘ page, wherein attention is also shamelessly drawn to a ‘qualification’ in (… sighhhh…) Reiki. If that doesn’t ring any sceptical bells, well then I guess you are the sort that enjoys looking around such places, and will find what follows offensive/negative/distasteful/etc.

The aforementioned blog post is an odious piece of work, serving primarily as continuation of the marketing being conducted on behalf of the HHI, and the figurative fellating of its Co-Director, a ‘Dr’ Brian Clement. (A first degree in biochemistry does not entitle one to put the title ‘Doctor’ in front of their name; quite how and where Brian Clement obtained the requisite medical or Ph.D. research qualification is, I gather, a somewhat mysteriously controversial bone.) Among various claims made in this sycophantic drivel are the following:

‘Hippocrates Health Institute, Florida, is the first and only place I would recommend to someone I loved who had ANY form of serious disease.’

‘If you know someone who is seriously ill, please contact me so I can tell you how Hippocrates works and how it CAN help them.’

‘And just to be clear, we’re talking to the tune of 40,000 guests with serious illness who walked away from West Palm Beach with their health and hope fully intact.’

This is all worked in amongst the perpetuation of several classic Quackery identifiers, including the predictable swipes at Big Pharma, here extended, with breath-taking cynicism, to cancer research charities. Genuinely puzzled and alarmed, I attempted (on 27th Jan) to post the following, I consider pertinent, comment:

‘Excuse me, but are you an oncologist? Are you medically qualified? What precisely grants you licence to offer advice to the seriously ill? Are you able to direct to published research on what the ‘Hippocrates Health Institute has known and has been proving for decades’? And do you have evidence that ‘… all the big cancer research charities in the west know EXACTLY what causes cancer’, as you put it? Your unfounded statements, advice and recommends are highly irresponsible.’

As I write, eight days later, my comment remains ‘awaiting moderation’. And it could be; though I have before encountered this tactic when duly criticising and challenging dubious public pronouncements, maybe I’m wrong to assume that it is being deliberately censored. Perhaps I’m not being perceived as one of those negative ‘energy vampires’, despite my comment discording with that whole ‘positive’ vibe thing that is the mantra of quackolytes. And I’m not being disparagingly dismissed as one of the ‘allopathic bunch’ (a completely nonsensical term). That the bastardisation of ‘free speech’ as freedom to mislead does permit complicating counter-argument, but that my questions read rhetorical?

So let’s not concern ourselves with anything else I have to say, and instead take a few more looks around the site in question.

On that HHI page again:

‘Raw, living food can, in most cases,REVERSE disease.’

‘… Hippocrates remains the FIRST and ONLY place I would send someone in need of a health shake-up, whether they were seriously ill, or just generally below par.’

This UK-based blogger would seemingly have you believe that there is no doctor or hospital or health facility in the UK that can be trusted to treat and care for you should you happen to fall ill on this side of the pond. In emphasis, she also tweets the notion: 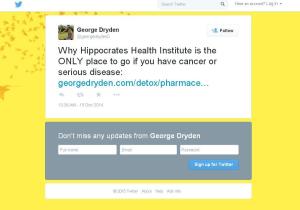 ‘REMEMBER: By contacting me directly, you will receive a $150 voucher to spend in the on-site Hippocrates store.’

Say, what?! Does this suggest inducement to offer inducements? Surely not:

‘But let it be said that I will NEVER provide links to products purely for reasons of profit. It will be because either I use the product myself, or I know someone personally who has benefitted from it.’ [sic]

So that’s that anecdotally cleared up, then.

But what of ‘The Health Educator Program’ on which this blogger is so keen to keep banging on about? If you’re not yet convinced that quackery is at play, here is what the program includes:

Want more? In case you’re forming the opinion that cult-ish reverence is reserved for the guru-esque ‘Dr Brian’, well there is also an unabashed plug for her favourite ‘colonic hydrotherapist’. A paradoxical ‘detox’ favourite of the self-styled nutritionists, this – after all, if they practiced their dietary preaching they’d be toxin-free and so wouldn’t need to fork out good money for jacksy-flushing ‘detoxification’, surely? Hey, I guess I’m just ignorant! But before you’re tempted to cut some sceptical slack, note that quackery’s favourite receives predictable mention:

‘Nux vom… Being a homeopathic remedy, the lower the dose, the more effective it is (weird, I know, but that is how homeopathy works. And it does work).’

Elsewhere in another lengthy re-rant on the Big Pharma-led conspiracy, lambasting the necessary regulation of the ‘natural’ herbal products endorsed, the fuck-wittery at work is exposed in the citing of the source for this lazy litany:

‘I found this in January’s edition of the magazine, “What Doctors Don’t Tell You” (www.wddty.com), a recent discovery of mine. It’s ace, and does exactly as the name suggests.’

As ever, there are plenty of ‘positive’ (never any negative) testimonials (eight out of thirteen provided by fellow HHI ‘graduates’), many of which profess to finding this place humorous. But I’m afraid it does little to humour or amuse me (I think the only time I came close to a laugh was reading the surely (?) tongue-in-cheek remark about George Michael, whom she lists as one of her ‘favourite things’); rather, I find it pitched often distastefully and somewhat aggressively. There’s plenty more to ‘entertain’ (depending upon your attitude to this kind of thing). Take, for example, the (electro-magnetic field) ‘EMF protector’, particularly (get this…] the version:

‘Crafted from a plant, it also doubles as a balancer and harmoniser.’

Oh yes, there’s plenty of vibration/energy twaddle going on. But of the stuff (directly or indirectly) on sale here, pride of place is apparently given to the (‘EMF-free!’) Therasage far infra-red sauna. Among the many insufficiently informative and questionable claims for this product listed among the 21 BENEFITS OF A THERASAGE FAR INFRA-RED SAUNA:

‘If you raise your body temperature to 105 degrees temporarily, as you will if you set the sauna to around 125, many cancer cells will be destroyed.’

In combination with colonic hydrotherapy it seems this device is handy for stimulating the creative imagination necessary to dumping this cruddy verbiage:

‘Taken first thing in the morning, an FIR sauna will give your brain the energetic equivalent of a lightning bolt – nothing gets my creative thoughts flowing like this amazing piece of kit.’

I make no statement on the capabilities or otherwise of this kind of product (so spare me the ‘How do you know it doesn’t work?’ fallacious line.) What I do question is the promotional language and the statement claims made for it – and for much of the other paraphernalia on display at this egregious website – particularly with respect to cancer. But then, that Disclaimer will have been worded with consideration of The Cancer Act, 1939:

(a)   containing an offer to treat any person for cancer, or to prescribe any remedy therefor, or to give any advice in connection with the treatment thereof; or

Wouldn’t it? After all, our media-savvy host can be trusted:

‘And I will always own up and confess when I’ve told you something that wasn’t quite right.’

Bit of work to be getting on with there, methinks.

Update 25/2/15: I’ve become aware that the link to the website that is the subject of this post is currently unavailable. Shrug

3 responses to “Calling out misleading information? It SHOULD happen…”