As Spain cautiously goes about easing its lockdown, and could last weekend report that its Covid-19 daily death rate has fallen to its lowest since the 18th of March, EL PAÍS carries an opinion article on Boris Johnson . 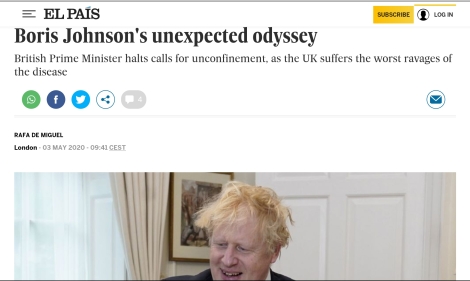 Its author, Rafa de Miguel, commences seemingly impressed by his subject’s familiarity with Homer’s Odyssey. Well, Johnson did study ‘Classics’ at Oxford. But is the ‘prodigious memory’ perceived really so impressive? Many of the middle-aged can still recite stuff they absorbed in their youth. But when it comes to a serious practical profession such as politics, drawing on Homer is arguably no more useful than reciting Pink Floyd’s The Wall. Johnson’s colourful, often off-the-cuff jesting entertains many bored Tories but masks suggestion of laziness and difficulty mastering a brief.

de Miguel considers Johnson to be inspired by Ulysses, whereas Johnson prefers to model himself on Churchill. Though de Miguel is spot on regarding Johnson’s readiness to ‘twist reality’, and an ego fed by reactions to his Brussels-baiting journalism, their eventual outcome, ‘the conquest of Brexit [sic*]’, was actually neither desired nor anticipated by the reckless Johnson, who feigned a look of remorse to disguise a headlight-trapped stare the morning after his disloyalty had ended the political career of his supposed friend, David Cameron. Instead, he bided his time, before claiming the ‘particular victory’ sought by the childish ego that wanted to be ‘King of the World’. Unfortunately for Johnson, an earth-bound adult is more suited to the office of Prime Minister than a vainglorious god.

Despite the overt self-advancement, it’s easy now to feel sorry for Johnson – well, it is for his acolytes and sycophants and apologists and excusers, and those who would only ever vote blue, regardless; so blind or forgetful are they to his charlatanism and dearth of integrity, they are untroubled by the questions it suggests of their own. A Prime Minister, having been politically and physically stricken by the pandemic virus, as the current object of his fickleness carries his latest offspring to term; as the UK bitterly disputes figures scoring protective equipment for health workers, daily tests, and Covid-19 deaths, which now overtake those of Spain; as forces to retain the lockdown measures necessary to bring the death toll down pull against those that seek the lifting of restrictions in order to salvage an economy already cut adrift by Brexit – for which Johnson shares massive culpability.

More lives lost to the virus short-term vs. more lives inevitably lost as a result of economic sickness in the long-term. This is a crushing responsibility for anybody. More than ever, the UK needs a leader suited to the task. Johnson, back at the podium, continues with the obfuscating and/or bigging-up of the significance of the figures and the Pollyanna charade of the power of positive thinking, like some wellness shaman aping a serious politician. Churchill had real gravitas but, so used are we to seeing and hearing Johnson play the likeable, wanna-be-loved jester, when he attempts to invoke his hero in seriousness, we cannot take him seriously. The persistence with wartime rhetoric is irksome to his critics, ironically now including another narcissist and one-time purveyor of dubious journalistic practices, Piers Morgan (a name I’m not aware is recognisable in Spain). Rather than Churchill, Morgan compares Johnson to Julie Andrews in The Sound of Music (or Sonrisas y lágrimas – Smiles and Tears – according with the often confusing foreign-language film retitling policy that accompanies Spain’s ruinous dubbing industry). Alas for the UK, there are many journalists who are happy to sing along. (How good it is to read one who doesn’t refer to him as ‘Boris’).

Johnson’s government has already changed tack, albeit tardily. Its dilemma now is how to time its next moves so as to minimise further inevitable collateral damage. He denounces the term ‘austerity’, which he all too readily signed up to, but he will wish to avoid scuttling an economic ship already holed by Brexit, for which he led the charge – not because he wanted the UK to leave the EU, but because he wanted to lead the UK. As Covid-19 recovery in Europe surpasses that of the UK, he looks to deflect and delay the comparisons by continuing, for now, with the tactic that got him where he is: the populist rhetorical style which is his make-up. So, he pours lyrical wax into the cracks, making promises that sound good now but will be impossible to keep; repeating the reality-twisting, optimistic line and hoping people will follow.

Like a lover who believes the philanderer will change his ways, Johnson’s admirers and stooges delude themselves that their mate “Boris” is the one. But to quote Hannibal Lecter paraphrasing Marcus Aurelius: ‘Of each particular thing ask: what is it in itself? What is its nature?’ Don’t expect Johnson to change his. He’s a career serial bullshitter. A political quack. What the UK needs is enough of his beguiled, starry-eyed marks to be honest enough with themselves to admit the fact.

* (My Spanish being ‘lazy’, I’m going from the automatic online translation, as I can’t find the article in the English edition. So, this problemaic phraseology may not be the author’s, but a result of this translation.)