Reworked and expanded version of a previous post has (following submission mid-March) surfaced in the latest issue of Leicester Secularist, the ‘monthly’ journal of the Leicester Secular Society. 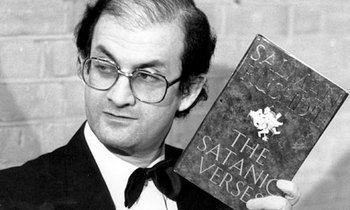 I’ve often wondered about the fatwā on Salman Rushdie, pronounced in February 1989, five months after the publication of his novel The Satanic Verses – and the ensuing effect on his life, and on (literary) freedom of speech.  The double irony of public book-burning by people who hadn’t read the thing, flame-fanning a controversy which encouraged its sale and actual reading.  How to contend against the latter? Take out any un-cowered publisher.  The dictatorial upholding of ignorance, and its bullying elevation to threats – and actual violence: ‘The tyranny of certainty’ (not my phrase; I can’t recall where I heard/read it).

In case you think this fatwā demised along with its decreer, Ayatollah Khomeini – it, err, didn’t(1).  The Satanic Verses is still banned in its author’s country of birth and world’s largest democracy, where a few years ago he was forced to cancel an appearance at the Jaipur Literature Festival due to (questionable) reports suggesting the likelihood of a contracted underworld attempt on his life(2).  And, on last month’s anniversary of the original Khomeini fatwā, Iranian state-run media outlets, deeming their pious audiences insufficiently motivated, jointly announced a further $600,000 bounty(3) for Rushdie’s execution, since increased to $4 million(4).

Is this (renewed) sanction really about any perceived insult to the fragile dubiosity of ‘revealed’ words? Or more to do with ensuring that the less book-ish faithful are (re-)minded not to read it, for fear that corrupted minds might dissent and challenge the established theocratic order? Surely the most effective response to offensive words/pictures is not to afford them the publicity of controversy – otherwise you spark not only protest by those who haven’t seen/read the thing, but increased interest and consequent sale/distribution of more copies/viewings.  You thus (intentionally?) draw attention to the (invented) insult.  “Surely if the sentence of the Imam had been carried out, the later insults in the form of caricatures, articles and the making of movies would not have occurred,” said a representative of the current Iranian supreme leader, Ayatollah Ali Khamenei, a few years back(1).

Consider the notion of it being taboo, a ‘sin’, to write and/or read something? The absurdity of “You can’t say that!” The prevention of human beings from doing what evolution has equipped us to do particularly well – communicate.  Rushdie’s adopted Blighty blighted by the paradox of many so-called ‘liberals’ equivocating their support for one of their fellow citizen’s right to write.  Rushdie has acknowledged that a book such as The Satanic Verses would likely not find a publisher today(5).  (Which suggests that the current Ayatollah’s representative should quit whingeing, as he can still beat this particular political drum whenever suits.)  Such a sorry state of affairs would seem to be abetted by the appeasing trend in democratic Britain.  Fear and HOPE 2016 reports a recent Populus poll(6) finding that ‘mainstream liberals’ are the group most likely to support restrictions on free speech: 58% of them endorse, ‘if necessary’, prosecution for ‘saying certain things about religion’.  Self-supposed ‘moderates’, such as Chief executive of the Ramadhan Foundation and one-time Liberal Democrat Mo Shafiq, deplore Rushdie’s knighthood(7), and prevaricate on the application of blasphemy law(8).  University student unions/societies ban or disrupt controversial speakers because their members demand ‘safe space’(9) for their sensibilities.  Politicians, such as Leicester East’s own Keith Vaz MP(10), express sympathy towards re-introduction of Britain’s abolished blasphemy laws (drawing necessary response from LSS President, Gush Bhumbra in the previous issue of The Secularist(11)).

But such re-legislation is hardly necessary.  Sam Harris has opined that ‘The freedom to think out loud on certain topics, without fear of being hounded into hiding or killed, has already been lost’(12).  Nick Cohen, who has written at length on the Rushdie Affair, argues that the ensuing culture of fear and taboo has (along with pernicious libel law) fostered self-censorship(13).  We’ve arrived at a ‘Catch-22’ scenario: criticise and you’re being disrespectful; don’t criticise and you are guilty of apathetically contributing to the continuation of the tenets, unwarranted privilege and authority afforded religion, which is what you want – need – to criticise.  Though we do not have, say, Pakistan’s or Ireland’s de jure blasphemy laws, we have, in effect, “…a de facto blasphemy law… based on the threat of violence”(14).  Cohen is right: people are cowed into silence (‘respect’) by this terrorism of the intellect.  He urges that we “communicate to the public that this is going on.”