Traipsing to a(nother branch of that) supermarket just before Christmas, I passed an independent bookshop in the throes of its closing down sale, as is the way of this world. Re-approaching later from the opposite direction, laden with some unnecessary extra victuals, I decided to enter and see if an interesting bargain might be had. I managed to check any temptation to more spending until, taking another scan along on the ‘Health’ shelves, I put my bags down and took a quick thumb through something, despite (or because of) its potentially vexatious title. And hence left the shop a not-too-proud owner of a copy, reduced to four quid, of Anni’s Cancer Companion. 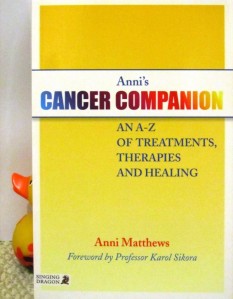 I rationalise thus: as one who notes the tendency to ostrich-ness on the part of those in thrall to all things ‘Complementary and Alternative’ to ignore/disregard the mere hint of dissenting argument, it doesn’t do for the CAM sceptic to shun all opportunity to improve one’s appreciation of its appeal, now, does it? (“No, Lee, it doesn’t.”)

Before I go on, I should perhaps present a disclaimer of sorts. Anni Matthews died of her illness. During her treatment she spent time investigating the various options presented as available to sufferers, compiling a compendium resource for others undergoing similar tribulation. This strikes me as a noble endeavour, and I’ve no cause to cast doubt on her motives, character, or any of the eulogies about her. So, for anybody who might assumptively leap across a chasm of non-sequitur to conclude that I mean any disrespect to Anni Matthews, or her loved ones, I’ll state simply once: I do not. What concerns me here is some of the statements made in this book.

The subtitle – ‘An A-Z of Treatments, Therapies and Healing’ – is an obvious pointer to what is largely an endorsement of Complementary and Alternative Therapy, as the (main) author preferred to call it. I insert ‘main’… because Anni Matthews did not write all the entries in this catalogue. Whether that is because she decided to leave certain entries to the ‘experts’; or she sadly ran out of time, I do not know (although the Foreword informs that she did not live to see the book in its final form). So, it is not Anni Matthews’s statements of which I’m solely critical, but one or two other contributors who – whether or not in good faith – may potentially misguide along erroneous paths.

Leaving aside the questionably rationalised Foreword by Professor (always a handy title on the cover of a book) Karol Sikora, I cannot argue against anything that makes the terminally ill feel better. I might appreciate the contribution some CATs can make in palliative care (depending on who is being paid to administer it). I’m just concerned that in a book so titled – with its obvious target readership – the responsibility-waving Disclaimer may be disregarded/overlooked by the sufferer. And whilst the title is careful – it does not use the word ‘cure’ – coupling ‘Cancer’ with ‘Treatments, Therapies and Healing’ (one definition of ‘therapy’: a curative power or quality) is susceptible to misinterpretation.

The book is structured alphabetically with entries (often, it has to be said, nicely written) on various (let’s call them…) topics orthodox or alternative, having (or given) connection to the care of cancer patients. These (mis-)informative entries are often (not always) accompanied by italicised (first-person) anecdotes – which I thus presume Anni did write. Occasionally, the anecdote is the entry. There’s also the gimmicky inclusion of ‘Top Tips’ on many entries, and almost all are appended with ‘Further information’, with references and/or links to relevant information resources, which, to be fair, do occasionally cater for the more sceptically-minded by including reference to bona fide medical sites and/or books and/or articles from the scientific/sceptical literature. In fact, ‘alternative’ entries often also warn of the scientifically-unfounded nature of the claims made for them. However, whilst this is careful and deliberate re-emphasis of the Disclaimer, it should be noted that co-presented anecdotes often read as though they are accorded equivalent evidential weight.

An early entry is neatly afforded (engineered by inversion of the adjectives, with ‘Complementary Therapy’ under ‘C’ referring back to…) ‘Alternative and Complementary Therapy.’ This, to my mind, demonstrates the favoured emphasis of the CAM league, with ‘Complementary’ often a sop to promote its infiltration into (there is no need to qualify here with ‘mainstream’ or ‘orthodox’) medicine. Anni was very open in acknowledging that the time spent with ‘patients’, the ‘verbal cuddle’, and the ‘interesting concept’ of the placebo effect, are all factors contributing to the improved well-being experienced by many. But what of this:

‘Certain alternative therapies have had some bad press. Claims for cures have been based on anecdotal and hearsay evidence as opposed to the scientific proof derived from a full clinical trial. Of course, this does not mean that alternative therapies are ineffective – just that they have not been proven to work by the same standards that apply to conventional therapies. And, just like orthodox medical approaches, they cannot be expected to work for everyone.’

Therein lays CAM-ite justification for the unverifiable testimony/anecdote as valid, unconventional evidence for alternative medicine. ‘Of course…’ ? Like ‘naturally.’ And ‘certain’ is now dropped, so effectiveness of all alternative therapies is implied. There follows this ‘Top Tip’:

‘Don’t be put off if your orthodox doctor scorns an alternative option you are considering. His or her main concern is likely to be wariness of ‘quackery’, so make sure your alternative medical advisor is fully qualified and registered with an appropriate body.’

Let me stress again – in case anybody seeks to object to my (charged) ‘negativity’ – there is some informative stuff in this book. It is good to see that, by and large, it seemingly does not advocate rejection (which could be damned irresponsible) of medical treatments for cancer, with summaries of several included. However, it concerns me that this panoplied interleaving with numerous CAM treatments is attempting a legitimising device. With the misleading reassurance that being ‘fully qualified and registered with an appropriate body’ obviates any charge of quackery levelled at your alternative therapist. It asserts:

‘I was helped by every complementary therapy I tried. Some helped to a huge degree, and some not so notably: much depends on the therapist.’

… and then goes on to extol the virtues of ‘slippery elm powder’ as recommended by a homeopath.

On which… were I to ask you to name a CAM variant likely included here, I’d wager top of the prediction list would be… homeopathy. And here is where I familiarise myself with one Linda Crawford, who contributed several entries. On homeopathy she writes:

‘… some of the ideas on which homeopathy is based do not fit well with conventional scientific thinking. For example, scientists cannot understand how it is that the more dilute a homeopathic remedy, the more powerful its effect. The explanation – that the water retains a ‘memory’ of the therapeutic substance – is difficult to grasp.’

I’ll say it is! Because it is not an ‘explanation.’ It’s a hokum postulation; an extraordinary claim utterly bereft of the extraordinary evidence necessary to substantiate it. Observe instead the onus-deflecting tactic of those with no evidential basis on which to draw – attack (the thinking of) those who call it out. Hence the dig at ‘conventional’ scientists’ inability to comprehend; their boring, unimaginative, uncreative approach that is stultifying medical progression, rather than the more radical, forward, (wait for it…) open-minded attitude of the CAM-ite . An attitude necessary for coming up with, say, a description of ‘Biofeedback’, perhaps?

If you are unfamiliar with this term, allow me to introduce you to one of the battiest doses of pseudoscientific language you are ever likely to be spoon-fed. The brief entry on Biofeedback in Anni’s book is confusingly vague (to put it mildly), though the pseudoscientific credentials are glaringly apparent. I cast no aspersions on the effectiveness of Biofeedback itself. But I have no idea which ‘version’ is being described, and I wonder how anyone can understand the language here, also perpetrated by Linda Crawford, which I find as confusing as sitting in on a political management meeting. Maybe that’s just me; but try this:

‘The theory behind biofeedback therapy is that the application of electric and magnetic fields – particularly pulsating magnetic fields – has the potential to restore balance in the vibratory circuits, ‘jump starting’ the body’s own defence and repair systems and facilitating self-healing.’

Needing help to understand this, I decided to see if clarity was to be had via its author’s own resource. Linda Crawford is one of numerous therapists who play at The Hale Clinic in London, which boasts ‘The widest range of holistic treatments in Europe.’ I was unsurprised to learn that this quackdom was opened in 1988 by our very own CAM king-in-waiting, Proper Prince Charlie. Here, the ‘LIFE Biofeedback System’ (a snip at £80 per hour’s session) is, err, ‘explained’ in text that just suppurates pseudoscientific gobbledegook. Indeed, I’d offer it up as comprehensive reference material for any student of the vocabulary. It’s all there:

In case you are wont to charge me with lifting these terms out of context, go take a look for yourself at the page and get back to me. This ‘device’ is so clever, one wonders that it generated these words itself. Because surely no rational human being could have. Could they?

Anni’s book is further sullied by Crawford’s entries on ‘Brainwave Therapy’ (or EEG Neurofeedback) and Neuro-Linguistic Programming’ (NLP). But I digress and ramble enough for one day. I’ve exhausted myself, and taken up, reader, enough of your time for now. So, I’ll not attempt conclusory comments on Anni’s book yet. I’ve a lot more to read in there; and there’s a lot more to peruse at The Hale Clinic (having attempted contact to ascertain for certain that it still exists for these purposes, as the latest press notices and Tweets on its website date from 2011, with its Facebook timeline being peppered with promotional posts for online money-making). Anything is possible. If we just let it be.